"The Trial of Ratko Mladić" 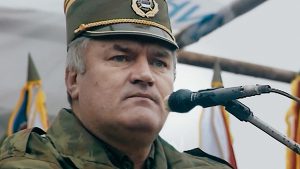 Mladic was one of the most infamous figures of the Bosnian war of the 1990s, synonymous with the merciless siege of Sarajevo, in which 15,000 people were killed or wounded, and the murder of over 7,000 Muslim men and boys in Srebrenica in 1995 — the worst crimes in Europe since World War II.

Filmed over five years, the film enjoys extraordinary access behind-the-scenes with prosecution and defence lawyers in the trial – perhaps the most important since Nuremberg – as well as with witnesses from both sides who were called to give evidence. The film also travels to Bosnia, where the past remains the present
An epic story of justice, accountability and a country trying to escape from its bloody past.