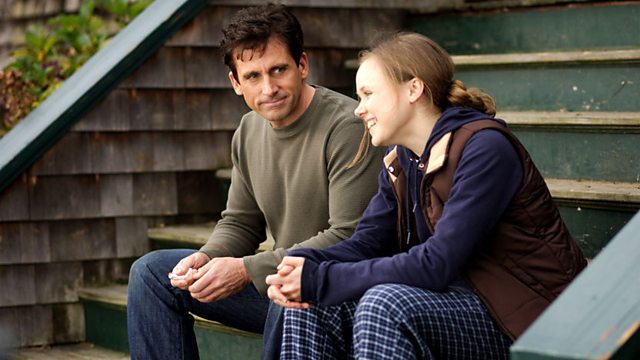 Context | Sometimes a film just comes along and fits so perfectly into the context of your life that it seems like all the co-ordinates on the map have led you to this very point in order to gain some new perspective on your own situation by watching it unfold in a movie. Introspection by means of an external stimulus, now that’s pretty mind bending and a cool thought for a filmmaker and philosophy student. But whatever your spiritual views and the answer to how and why this happens, it does. And it happened to me with this movie ‘Dan in Real Life’ and it was a delicious twist of fate that it did which inspired me to finally starting a blog and sharing my views on films and other stuff. My backstory and motivations for viewing this film don’t matter because it’s about something bigger than the specifics, it’s about a theory of context-sensitive movie viewing and I’m a big believer that the surroundings and the situation of the viewer factor into the viewing experience in a big way. Let me digress a little to explain further. Since it’s my first post, now is the time to get familiar with my views.
For example, I still haven’t seen 2001: A Space Odyssey because of this very belief. I know that this film is dubbed as one of the greatest movies of all time and since I’m a fan of Kubrick’s, I’ve been saving this movie for the perfect time to watch it so that I don’t waste my first viewing. Is it ridiculous or is it sensible? Both I guess. But my thinking goes that if you watch some films in different contexts it ruins the movie. Case and point, I watched Superbad with my friends and had a blast, then I watched it with some parents and it was the most uncomfortable movie going experience of my life. Do I watch lots of movies? Yes. As many as I could? No. There’s some movies, blockbusters and cinema tat that I watch far too often because for them the environment and viewing conditions needn’t be as strict because they don’t require much cognitive or emotional effort.  But real, thoughtful, art house films I like to save. This means that I don’t consume as many films as I’d like to, but when I do, I lose myself in them completely. Therefore my film catalogue is composed of quality over quantity and films that I really connect with. But starting this blog is a way of getting me to watch more and voicing my opinions on them. I don’t want a strict format, so I’m just going to go with a fun little ‘idea dump’ about the movies I review. There’s enough format and star ratings out there if you want a proper review, I just want to talk about my perspective on some things as a filmmaker, dipping into some deeper philosophy student cliches every so often.
So here we go.

Steve Carell | Being honest, I haven’t seen too many of his films other than the obvious comedy offerings; 40 Year Old Virgin, Anchorman, Bruce/Evan Almighty. I have no idea if he’s done something as ‘straight’ as this before but at least for me, he’s synonymous with comedy and although this is pitched as a comedy, it isn’t, it’s way more than that. Sure it has comic elements, but it’s a moral tale about a man torn between many things, namely; his head and his heart, his brother and his brother’s girlfriend, his family’s views and his own opinions, his resent towards the love he’s lost in his past and the excitement for the love he seeks to find in his future. Carell acts it with such humble, human characterisations that I didn’t for one moment stop believing that he was the eponymous character, Dan. I believe this is the highest compliment that can be paid to an actor, when they have the talent to step outside their own personality and break the audience’s connotations and associations to them as an actor and substitute themselves for a character. I think that’s just magic and Carell nails it. He’s a joy to watch and his bringing to life of the story is what makes it work.
The Vibe | It’s not a perfect film by any stretch of the imagination but it has a charm and honesty which makes its flaws forgivable. Is this the way a film should be judged? On a technical objective aspect, no, but since my argument here is that context and subjectivity matters a great deal more than anything else, it explains how flawed films can still be extremely valuable. The film just has an aura and a spirit which is greater than the sum of it’s parts because it is so engrossing. Sure, there’s some cliches, duff lines and questionable scenes, but it’s able to lift itself above the issues and deliver a profound experience with real soul. Again, this is all we can ask as an audience; to be moved. These flaws are proof why indie, arty flicks which are rough around the edges can be better than polished studio pictures, because no amount of CGI can create a spirit for a movie. A movie’s spirit is down to good filmmakers making good films, not big money trying to make profitable films. Criticisms | My biggest problem with the film is that the third act is rushed. I’m speculating here, but it certainly feels like the filmmakers got pressured into dropping a bunch of time from the edit and it was the finale which suffered. The introduction and the set up are so delicately crafted that I expected a better ending. When it all starts kicking off, the climax isn’t maintained for long enough to do justice the journey we have just been on. I suppose it’s like a great set up for a joke which leads to a chuckle instead of the hysterics you expected. It all ends too soon and I was left with a bit of an ‘Oh…alright then’. I wanted the film to be another 10-20 minutes longer so that it could round things off slowly and gradually, with more purpose than just tying up the loose ends. I really hope that this is down to studio pressure instead of a lack of creativity. But because I’m always thinking about stories and movies, when a movie ends in a way that I don’t like, I just paint my own ending and that goes some way to filling a void. It’s not that wanted a different ending per se, I just think it should have been slower so that we could taste every drop of the drama instead of being teased and ushered out the door with a wave instead of a tender hug.
Thoughts | The question I ask myself is whether the film was actually good in and of itself or if it was just my perception that made it good because it related to things I’ve been pondering in my life; chiefly, morality and hypocrisy. Am I giving this film a meaning through my own experiences, or had I been in a different situation, would this film have been less good? As per my introduction, I think context is such a huge part of our viewing experience that it’s impossible to separate the film from the viewer and the viewer always brings a new perspective. But again, surely this film is niche in it’s message and so long as the target audience, namely, me, successfully accesses the meaning behind it then that’s all that is necessary for making it a good film. Of course, if it can extend to more people and stir up the same effect outside of its immediate target audience, then that’s when it becomes a bigger, better, more successful, inter-relateable film.
Verdict | I don’t think I’m going to give stars or scores to movies I review because there’s enough of that around. I don’t want people forming a numerical based bias from my reviews, I just want to give my honest opinion. Rating a film is to assume an objectivity and an answer but all I have is opinions, not answers. All I can say is that I really enjoyed it and felt really connected Dan and everything he was going through. I shed a tear and the film stuck with me over the course of the following day and it led me to talking to friends about it and writing a review…so it certainly left an impression. As a whole, I think that it’s caught in a bit muddy water, drifting somewhere between commercial and artistic, neither wholly one nor the other. But I’m wise enough to the game to understand all about the compromises that occur when making a film and I don’t think it sacrificed too much because, ultimately, it still kept its soul and I’m glad to have had the chance to watch it.
To extend the art vs commercialism point, I’ll leave you with two different posters for the movie. The first is what sits on the DVD case and what you will have seen on adverts, the second is one of a kind which I found online and never saw before a bit of a google trawl. For all I know it could even be fan art, but it doesn’t matter because it gives a good distinction between your typical ‘Hollywood’ safe bet poster whilst the second, although far from perfect, fits the style of the film far better. Maybe more people would be able to access a film if it was correctly advertised to its demographic instead of the stock, shotgun approach. But that’s advertising for you. I’m sure I’ll moan about this topic in a future pst. In the meantime, message me with any thoughts you have about this movie, recommendations for similar flicks, opinions, disagreements, suggestions or ideas for future reviews.
Stalk me: Twitter | Facebook | Instagram | Talenthouse