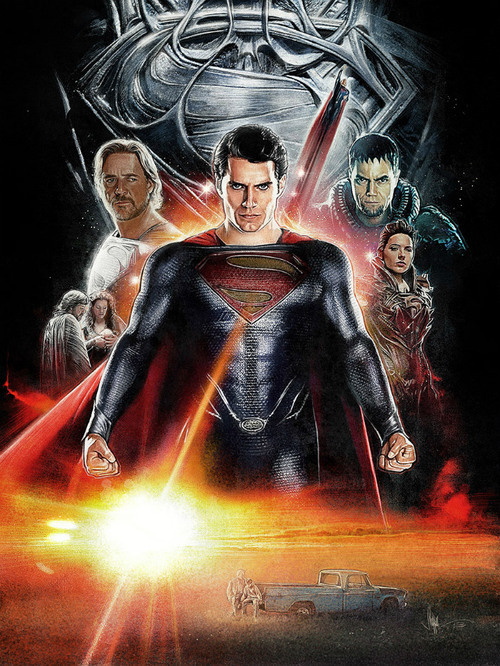 Blockbusters are seen by so many people with reviews floating around in every paper and on every blog that I’ll try not to spend too much time on in depth reviews of these films, because chances are you’ll already have heard most of what’s kicking around. I’ll try to focus my words on the smaller, less press friendly films. That said, I do love a good blockbuster and I’ll always have an opinion on them too so instead of an all out ban, I’ll try a ‘quick hit’ approach, throwing out some of my main thoughts in one stream of consciousness-type paragraph.

I loved the backstory, flashbacks and general history of the man which was presented with real care and affection – the style of camera work definitely helped us to get close to the narrative in these tender moments. As much as I loved the man part of the film, I disliked the steel in the final act. It felt like the backstory and all the delicate filmmaking which came before was neutralised and undone by the slip into chaotic action. Okay, I know Superman means action will be present, but I expected something smarter and better presented. I wasn’t expecting an art house movie at all – but the action is clumsier than the beginning of the film sets itself up as. I thought it had more in the bag to be honest. Boredom and lethargy really kicked in for me as waddled to a conclusion. This is because the ending tries to maintain too much excitement for way too long. This means that as a viewer, I habituated to the thumping music and high octane action so that it stopped being a climax and slipped into a kind of normality. And climaxes aren’t supposed to level out, they’re supposed to be an explosion that leaves you wanting more instead of wishing for a conclusion. There was no point in the movie when I though that Superman was in any real jeopardy and although there were tough obstacles for him to deal with, I never felt I had to hope for Superman because I always though ‘he’s got this’ even when we were meant to feel like he ‘didn’t have it’. Look, we all know the good guy wins in this story, but the magic of a film where the audience knows there’s a happy ending is in that complete submission to the drama, where our hearts trick minds into feeling something we know just cannot be the case. This film lacked that magic but it’s hard to pinpoint why – perhaps because Superman was a little too perfect because every moral dilemma ended up with the good being chosen with not enough time spent on the inevitable anger and darkness that must exist. Maybe I’m cynical and too used to the Batman path which superhero films have taken. Henry Cavill was a very good Superman although there were some confusing mixed vibes in the delivery of some moments. Sometimes he was really gentle and human and sometimes really alien. I guess this highlights the dual identity of being, yup, human and alien at the same time…but this aspect of the story wasn’t a big enough feature to make these parts of the performance coherent, it just felt incidental, unexplored or sidelined in a way. If they were deliberate, good, but could’ve been further explored. Overall he gave a good combination of charming, gentle, strong with even a slight air of smugness creeping in. Michael Shannon was great as the antagonist General Zod although there were a few cliche ‘baddy’ moments bad those are the fault of the script, not the man. But I’m such a Shannon fan that maybe I would say that. Kevin Costner was fantastic as Jonathan Kent, Superman’s earth father, although I was left bewildered and pondering his age (if I did the maths right) in the one shot which revealed it was revealed. Gosh, I’m so pernickety, I know. Superman’s mother, Martha Kent, played by Diane Lane (coincidental surname eh?), gave my favourite performance and really owned the screen time she had. As did Costner actually. Yup, these were definitely my favourite moments of the movie. I was indifferent on Amy Adams as Lois Lane but she definitely grew into the role as the film progressed. I actually think they should’ve done more of an ‘annoying reporter’ image at the start to make her allegiance to Superman more inspiring and victorious. I liked the way they dealt with the camp Superman moniker, making it almost unimportant and dealing more with the man instead of the brand. A few other gripes but none worthwhile enough to mention, just the standard glazing over of certain plot points, selective avoidance of some subjects and false dawns of moments/characters with implied significance which weren’t revisited.

A good first outing but, being the type of viewer that I am, I preferred the more human first part of the film to the guns blazing crashy crashy bang bang ending. Although an all-action finale is to be expected, it ended up being a bit too long and dull instead of sudden, surprising and epic. Definitely looking forward to the next one. Here’s hoping they stick with the roots and history aspect. Does it create a strong enough identity for itself as a franchise? Not yet but it’s moving in the right direction. I think the next film will answer that question better but this first film suggests that it has enough in the bag to have an identity, whether it finds its feet, stands tall and becomes another Batman jobby is to be determined by the bravery of the filmmakers. Here’s hoping that Superman’s ‘got this’ too.

Mark Kermode shares his views, with the ending also a problem for him.