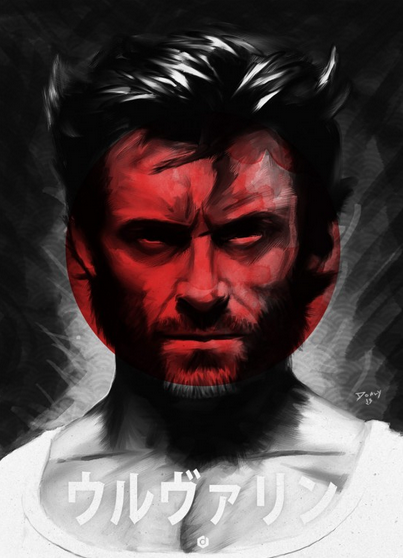 Firstly, I’m gonna whack a disclaimer up here and tell you that although I really like Wolverine, I’m not a fan outside of the movies. I know nothing of Wolverine lore or the comic books, so I’m writing this with a self confessed degree of ignorance and constructing my opinions on the basis of the movie as a stand alone artefact. Nevertheless, it’s between him and Spiderman for my favourite ‘Superhero’ if you must know. I don’t buy the Batman hype personally. So let’s dive in.

I loved the film. I don’t know if I was in a particularly great mood or left my harsh critical glasses at home or something but days after watching it I’m still telling people it’s one of the best movies I’ve seen in a while. And what’s weird is that it comes from a place which is definitely not my usual cup of tea when it comes to the setup of a movie; with it’s corporate blend of Hollywood, Sequel, Marvel and action. Usually too yucky for me to take. But this worked because it was way more than an action romp, it had some genuine depth and great storytelling. It’s the first film I’ve been in the cinema since the upsettingly poor ‘The World’s End’ (thoughts here) and it was just what I needed to make me stop being so down on the mainstream movies which I hate to hate. My mates always have me down as overly critical when it comes to cinema trips but it’s just something that comes with being a filmmaker I suppose and having that extra dimension of viewing, seeing things others might miss. But all I tell people is that I love movies and the critical stance comes from a desperation to feel genuinely impressed by a movie, not for the sake of hating. So I’m glad Wolverine delivered because the last couple of cinema trips ended up with my views bringing a downer to proceedings afterwards as everyone waxed lyrical and I did not. It’s good to know I’m not too critical to never enjoy a blockbuster, I just have very high expectations.

The funny word that I’d use to describe the film is probably; Gripping. Literally. I found myself gripping my arm rests and leaning forward so much that I actually snapped out my viewing bubble to reflect on the incredulity I had at myself for doing this – I never (well, so rarely that it’s on par with never) have a physical reaction like this to a film. For the first time since seeing ‘Argo’ I was actively thinking to myself ‘this movie is awesome’. I love that. It’s akin to Lucid dreaming, realising you’re dreaming and being able to take control. I became aware of my own enjoyment and that let me enjoy it even more.

Of course, Hugh Jackman is just great in this film. Yeah there’s some cheesy cheesy one liners and cliches but I saw a comment on YouTube on the official trailer which puts it perfectly “Wolverine is Jackman’s Indiana Jones – the role is entirely his and only he can play it.” So true. As well as being ripped to shreds and a general badass throughout, there’s a real tenderness and delicacy, a wounded animal vibe that is deliberately used to contrast his wild side and his human side. Of course, this is still Hollywood so when I say depth, I mean depth in virtue of the norm for the genre but hey, it’s still there and it helps you root for the Wolverine.

The main focus of the story being in Japan is actually, to my mind, a pretty bold move. Again, I’m sure it’s part of the comics and the Wolverine story so it makes sense, but to decide to play out an American action hero on foreign soil, interacting with almost entirely non-American characters is ambitious and brave and yet they nailed it because you forget you’re not watching a movie that’s out if it’s usual American setting. It’s kind of like, okay, he’s in Japan, no biggy and you don’t really think about it. It actually gives us access to some great cultural interaction, themes that aren’t usually engaged with in these kinds of movies and a brilliant cast. I seriously want to go to Japan now.

Now, I think the Trailer for the film sucks. It didn’t make me want to watch the film, my love for Wolverine made me go and see it. In fact, the trailer almost made me not want to go. I re-watched the trailer after the movie to check that it still stank and yes it does- so here’s a link to some Behind the Scenes material for you to enjoy.