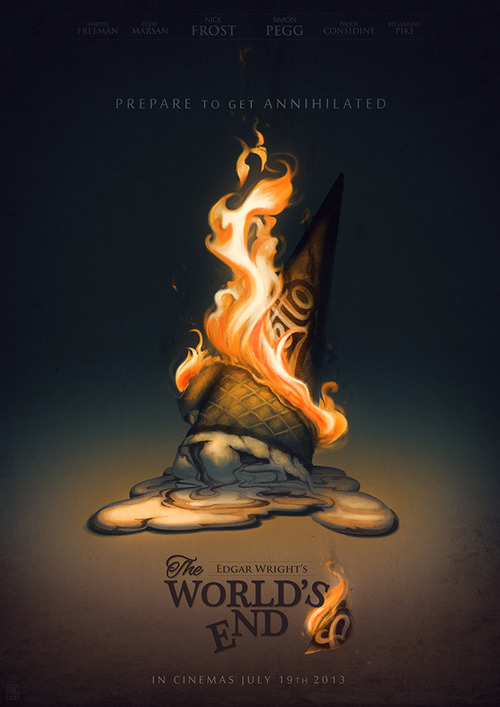 Midnight screening of The World’s End. That’s the dedication, that’s the hype, those are the hopes I had for this film. I was in love before I even met the stranger on this blind date. In love because the previous work of my matchmaker had been spot on (Shaun of the Dead, Hot Fuzz), and I had heard great things (Twitter, yeah). Armed with a Cornetto – alas, they only had Strawberry – and it was love at first sight. But as the clock ticked through, the night ended without any affection and I was gutted. *In the hope of being completely wrong, I’m going to squeeze an asterisk in here and add that I was extremely tired after a long day of work so I hope my mind was playing tricks. Nevertheless, these are just my thoughts on what disappointed me. There are enough reviews on where it excelled – I’m going to play the bad guy, see?

It makes me sad that I was so disappointed because I love Edgar Wright films. Shaun, Fuzz and Pilgrim are some of my all time faves. Now, let me just say that I have no undue bias towards Wright, I like him because his films are ridiculously good. So by that token, if he makes a bad film, I’m not going to defend him. Let me pause for a moment and say that this ISN’T a bad film. It’s actually a very good comedy with some great lines, great deliveries and just the right tone. I didn’t dislike it at all, I laughed throughout but…it just fell short of the greatness it promised. That’s because a director of this pedigree doesn’t aim to make good comedies, he aims to make good films because of the bar being set so high.

First off, I think the supporting cast were given really rubbish characters to eek life out of. The film plays out as reunion of old school friends, and even though the chaps clearly had beef with each other and life moved on from their early days, there was not a huge chemistry between them. I get that there needed to be tension but for that to work I needed to feel like despite it all they had an amazing bond that transcends time or anger. But there was none of that. They were just moaning at Pegg the whole time which raises the question of why they said yes to the pub crawl. They didn’t have to say yes and they weren’t manipulated enough to be there beyond their own desire but then there was no semblance of fun, of; actually, getting out of the office and seeing my old mates in my old town is pretty exciting. And since it never felt like they were enjoying it and from there, how the hell can we enjoy it? Specifically, Paddy Considine was totally wasted and I had absolutely no emotional connection to his character. Not even close. Martin Freeman wasn’t used very well either. His character was too much like a caricature – seriously, who actually uses Bluetooth headsets and says WTF constantly in an attempt to be cool. It’s like a poor Hollywood cliche of what an Estate Agent is meant to be and…it just didn’t work. It wasn’t funny, it was cringey. WTF wasn’t funny the first time and by the fifth time I was bemused. HOWEVER Eddie Marsan was surprisingly the pick of the bunch. He was given real depth and did moving and funny really well.

Pegg was brilliant. I mean seriously, the hollow eyes and almost delirious energy was a real sight. Stole the show. BUT the script gave him an awful ending and there was no revelation, inspiration or pathos. Part of me thinks I’m just used to the happy ending but another part thinks that after a journey this big which means so much to this character that he deserves something better than he got. Because despite the deliberate dislike, there’s a definite sensitivity and redeeming undertones in the man so it’s a shame they didn’t really come to the fore. And that’s the first time thats happened in the Cornetto trilogy. Frost was great too but the incredible tension between him and Pegg just wasn’t believable and played out pretty poorly. I didn’t feel a connection between them. It felt like I was being TOLD they were best friends and had a dark history that separated them but I just didn’t FEEL it. Shaun & Fuzz both saw their friendship laced with tension but with the love also oozing out of the interactions. But this had none of that feeling. Too much trouble and moaning and not enough endearing friendship for it to work.

It touched on so many ideas and then decided to go walkies with half finished senten.. That’s how it felt. There were some really big concepts thrown in but instead of focusing on one and blitzing it. It felt like there was more I needed to know after the credits rolled, questions I needed to ask the characters. And that’s not cool. And it’s not the kind of deliberate vagueness, it’s born of unfinished ideas. I liked the idea of people as robots and the clear references to social media (the baddies bleed and see and scream in blue…blue which is the colour of Facebook and Twitter…coincidence?) but it was dealt with quite brashly.

The baddies ruined it. Truly awful. No big climax it just fizzled out. It totally didn’t know how to end it and it was atrocious. Fuzz had the hero returning on horseback and this…had nothing. For me it did a ‘The Knowing’ – excellent first half of the film, then the baddies come along and the imagination dies. There was too much focus on the spectacle and not enough heart.

So listen. It wasn’t baaaaaad. It just wasn’t the genius that flows so effortlessly from Wright & Co. Nevertheless, I can’t wait to watch it again, relive the laughs and hope that the second date is better than the first.